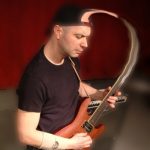 Chris RIME Blues Black Home – 2005 In 2005, the album ” Blues Back Home ” (Night and Day) wins wide acclaim. Sitting somewhere between Blues and World music, the record enables Rime to return to his first love : the Delta Blues. Etienne Mbappé, Djeli Moussa Diawara, Roger Biwandu, Allen Hoist are among those bringing their warmth to this enchanting musical voyage. Several songs from the album are included in the film soundtrack of ” Frankie ” (with Diane Kruger) in 2006.

Be the first to review “Blues Black Home” Cancel reply

At The Bar With Mr Punk