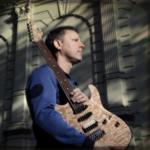 ‘Generator’ was first released by Mark Varney’s legato label in 1995. The album, with featured guests Scott Henderson, Frank Gambale, Carl Verheyen, Scott Kinsey and Dan Gilbert quickly became a fusion classic. The album has been out of print for a long time, but is finally now available again. Remasted, fixed and with an added, never before released track, rereleased on Richard Hallebeek’s label Richie Richie Music.

Be the first to review “Generator (2013 remastered)” Cancel reply