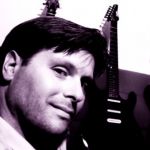 03. This Little Thing In Everyone's Heart

After his first instrumental album with the Double Heart Project featuring Chris Poland (Megadeth, OHM) and Cyril Achard (Taboo Voodoo) as guests, a participation on the Shawn Lane Tribute Vol. 2 on Lion Music, and after several months in the studio, guitarist Franck Ribiere is back with “Bloody Karma”.

This new instrumental album is an intense musical journey where the search of emotion is always a priority. A great effort has been done on compositions, with melodies that won’t leave your head, with a mix that is very powerful, and it also includes a great musical diversity with influences coming from metal, rock and fusion.. Guitar influences such as Steve Vai, Marty Friedman, Shawn Lane and Frank Gambale can also be heard. The drums are played by Vincent Fabre (Ex-Cyril Achard’s drummer), who also plays guitar on two tracks. Arnaud Decompoix plays bass guitar on a track and the well known Italian keyboard player Mistheria (Bruce Dickinson, Lion Music) plays amazing solos on three tracks.

Be the first to review “Bloody Karma” Cancel reply