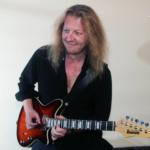 2. High Above The Unknown Places

3. Time Is Running Out

4. After The Tour (avec Patrick Rondat)

Yann Armellino is a French lead guitar player combining different musical styles. Influenced by the eighties hard rock, he is following a productive career. 4 cds done, from the 1st, really heavy, out in 1999 to the fourth Crossrocks (2004) which shows his capacity to include blues root to a modern sound. His journey is intriguing, studio perfectionist, low profile, not effusive, it is on stage that we can discover his truthful spirit, his simplicity, his audience respect.

Gimme the Sound, Yann’s fifth album, opens a new path in his career and catalyzes a project he started when he was learning his first scales! Indeed, this new project dubbed Y&C, materializes the meeting with his old-time friend, Chris Caron – a French-American singer (a real one!) with an expressive, warm voice. Chris is a friend with whom Yann dreamed to write songs when they were kids!

Be the first to review “Gimme The Sound [MP3]” Cancel reply