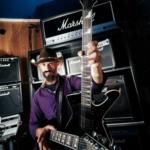 Manu Livertout has been playing guitar since the age of 12. He turned professional after joining the CMCN professional music school in Nancy in 1989. The following year he became a teacher there.  This marked the beginning of many projects for Manu.  He soon started demonstrating guitars for the manufacturers LAG and James TRUSSART.  During this time he published the guitar methods book “METAL PAGANINI while also writing for various guitar magazines such as “GUITARE ET BASSE” and “GUITAR WORLD”.  In 1995 his band “MANIAC SPLEEN” released their album “BASTA” and in 1998 Manu released his first solo album “INDIAN AKROBTIK” with Dirk VERBEUREN (SOILWORK, SCARVE) on drums and Alex MONPART on bass.  These events lead him to test guitars for the well known guitar designer IBANEZ and subsequently host several master classes all over France. His second solo album AUTOPARODY was released in 2002 under the label FURTIVE RECORDS and distributed by MOSAIC.  Phil ELTER became the new bassist for the group and Guillaume BIDEAU (MNEMIC, THE CUBE, OWM, SCARVE) was introduced as the band’s singer.  While continuing to write for various music magazines, Manu released his guitar methods DVD “METAL MACHINE” which enjoyed considerable success. His third album “The Bounder” was released in 2007 surprising critics with its harmonious melodies. PHIL ELTER has since been replaced by LOIC COLIN on bass and Manu is now involved with three groups “MANU LIVERTOUT BAND”, “BOYDAMONT” and “BLOODY MARY”.   He released 2 albums in 2009, “WE ROCK YOU SUCK” which he co-wrote and played bass with BLOODY MARY and RAP N ROLL with BOYDAMONT a successful mix of hip hop, rock and funk.

Be the first to review “The Sweet Path [MP3]” Cancel reply

That’s the way it is