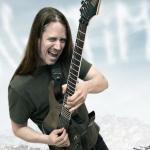 The album takes the heaviness a little further than the debut album Big Time and for the first time also incorporates Adrian´s guitar slapping technique on two of the songs (Awkward Silence, Camel´s Dance). The music always remains melody centered with clear song structures while grazing many rock and metal styles including fusion, progressive, world and blues.

The following guest musicians are featured on Easy Game:

Most songs were written during the summer of 2013 by Adrian Weiss.
Offbeat Frankenstine is a tune of guitarrist Manuel of German rock band Korsakow that he handed over to Adrian as a basis for an instrumental track. The rhythm and acoustic guitars and the final lead part were perfomed by Manuel, the other leads by Adrian and four guest players including Jens Basten (Adrian´s bandmate from Gloryful) and Vito Papotto (formerly Gloryful, Exotoxis).

The album was recorded, engineered and mixed by Tim Schulte in Hilden, Germany between December 2013 and May 2014.
Mastering by Eroc at EMR in June 2014.

After releasing his instrumental debut solo album Big Time in 2011 he formed a live band in 2012 to bring his music to the stage.
Adrian became a permanent member of the band Gloryful in May 2014 after he had sporadically performed live with the band as a stand in for over a year and contributed two guitar solos on the bands second album Ocean Blade, released in May 2014 through Massacre Records.
Since 2000 he has been a member of the extreme progressive metal band Forces At Work with which he released 3 EPs and one full length album and was featured with a metal arrangement of J. S. Bachs violin concerto in d minor (3rd movement) on Victor Smolski´s solo album Majesty And Passion
From 1996 to 2002 Adrian played in the prog rock-/ metal band Thought Sphere and released four full length albums two of which were released through B.Mind Records.

In 2010 and 2011 Adrian won second place at the Guitar Fight Club live show in Bischofswerda, Germany. Ha has also performed solo clinics at various events including the Guitar Fight Convention in 2009 and 2010, the My Music Expo in Dresden and the New Düsseldorf Pop.
Adrian plays TS Customs guitars.

Be the first to review “Easy Game” Cancel reply