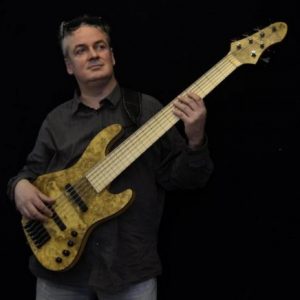 01. Kawana : bass duet with Decebal Badila (Romania) ; one of the best bassist known by Fred.

02. All is : a compostion played with two PL1FS basses

03. Anhoé : original track played in duet with his father (Guy Schneider) on contrebass

05. Liberty city : special cover of one of the best Jaco Pastorius composition, duet with Gilles Coquard

: one of the most played jazz standard interpreted in duet with Corinne Dranguet on vocals

: original composition written and played by Fred with voices (a melody, two voices on tapping)

09. Poléra : composition interpreted by Chico Wilcox, Igor Wilcox and Fred, Chico is one of the best brasilian virtuoso, so talented, playing here with his brother on drums and Fred...

11. My favorite thing : an other bass/voice duet with Véronique Ebel singing

13. Solid Heart : little bonus melody composed and played by Fred on his bass including midi captors

This album puts Fred Schneider on higher step, he plays his own compositions and some of his favorite jazz standards.

The strengh of this album is that all musics are interpreted by electric and acoustic basses, excepted on 2 tracks.

Be the first to review “Seul à seuls” Cancel reply